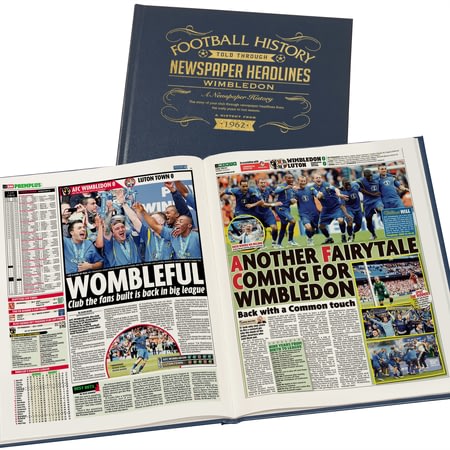 Capture the history and greatest moments of Wimbledon football club through newspapers written at the time.

Starting in 1962 with some memorable FA Cup games, this book charts a glorious history of great league and cup games and names through the decades.

Top stories include Wimbledon's first league game with Halifax, promotions from Division 3 to Division 1, Vinny Jones scores the only goal on his debut against Man.

The 'Crazy Gang' win the FA Cup and 10 years later there are no cup winning players left at the club.

AFC Wimbledon is formed and wins promotion to the league.

Coverage continues right up to the end of last season.

This is a unique and wonderful gift and a must have for all Wimbledon fans.