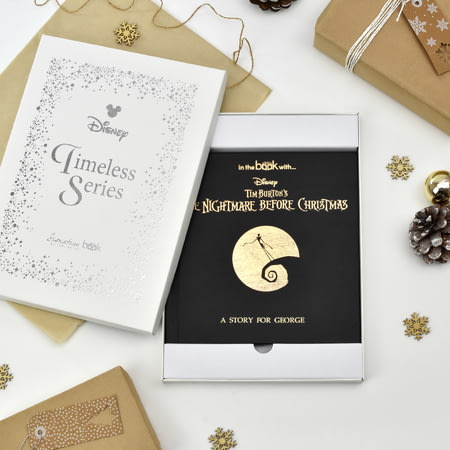 Tim Burton’s The Nightmare Before Christmas is a 48-page square format book based on the 1993 stop-motion film that became a cult classic.

The book tells the story of Jack Skellington, who, when bored of his ghoulish life in Halloweenland, stumbles upon the bright lights and magic of Christmas.

An invigorated Jack is determined to replace Santa and be the one to deliver Christmas cheer to the population, although doing so may not be as easy as he thinks.

The Nightmare Before Christmas personalised story-book will be a thrill for fans of the film and newcomers alike, as Burton’s iconic style flows from page to page with both rhyming text and spectacular illustrations that make this a Christmas book like no other.

The book is personalised with the recipient’s name on the top of every page, as well as being embossed on the front cover which has been bound in a black leather.

Each book is presented in a Disney Timeless gift box, which compliments the book perfectly.