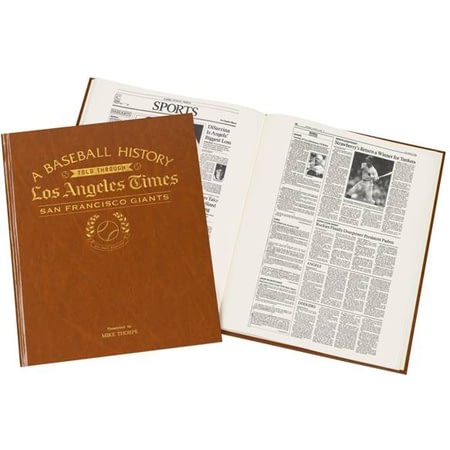 Capture the history and greatest moments of the San Francisco Giants through LA Times newspaper articles written at the time.

This book is unique and makes a wonderful gift, the perfect for any proud Giants fan, with newspaper coverage beginning in 1905 when the Giants (then based in New York) won their first World Series.

Reports then follow to cover more triumphs after their move to San Francisco, including nine National League pennants in 1904/05, 1911-13, 1917 and 1921-24, and two further World Series in 1921 and 1922. With a proud history, articles cover more than just the wins and losses, inside you’ll also find coverage of Barry Bonds record-breaking home run season of 2001 and his historic moment in 2007 when he hit his 756th home run to pass Hank Aarons record. Reproduced to near full tabloid newspaper size it is bound in luxury tan leatherette, gold embossed, hardback cover.