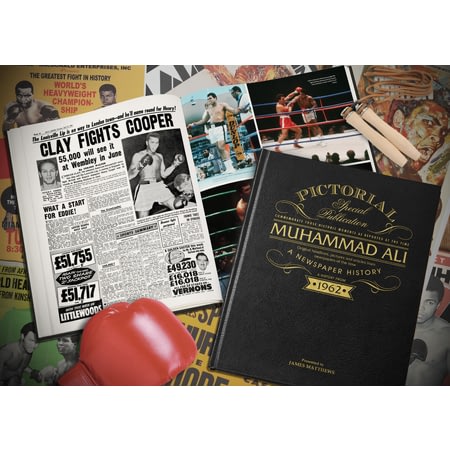 “I wrestled with an alligator, I tussled with a whale, I handcuffed lightning, thrown thunder in jail, I'm bad man.... Last week I murdered a rock, injured a stone, hospitalized a brick.

I'm so mean I make medicine sick.” There’s a reason why the called him the Louisville Lip.

Recognised as the greatest boxer of all time, Muhammad Ali’s glorious career is commemorated here through news coverage of the time.

From his first fight when he was still called Cassius Clay, to when he was named Sport Personality of the Century in 1999, and beyond.

The Greatest’s greatest moments are collected together along with pictorial sections of his career highlights, and to quote The People’s Champion, "It's not bragging if you can back it up."

Personalise this commemorative edition with a name which will be embossed on the front, and a message for the opening page.