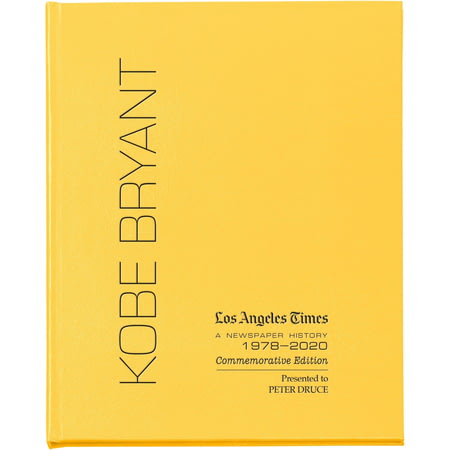 On Sunday, January 26, the world woke up to disastrous news.

Killed along with his daughter in a helicopter crash, which also claimed the lives of the other 7 people on board, the tragedy of the Calabasas crash still resonates today.

A man whose NBA career was celebrated upon his retirement, not only by Laker's fans but by teams across the country, Black Mamba was respected throughout the basketball community.

Dedicating the whole of his career to the Los Angeles Lakers this gift set has been created as our way to commemorate this once in a lifetime player.

The first edition within this set chronicles the history of the Lakers, as told through news reports of the time.

Bound in a hard, tan cover with gold embossing your very own personalised edition begins with the Lakers' move to LA in 1960, and includes coverage of key Lakers events, right up until the end of last season.

To create the perfect gift for fans of Kobe and the Lakers alike the second edition within this unique set has been researched and comprised by our archive experts, creating a memorial like no other.

Bound in an iconic Lakers golden cover, with a foil embossed title, this edition begins with reports of Kobe's death and is comprised of tributes and memorials to the greatest player of our generation.

Both books in your collection will be foil embossed with the recipient's name on the cover and will also include their name on the dedicated opening page.

You can also include a message for the recipient, making this the perfect gift and tribute for Kobe fans.