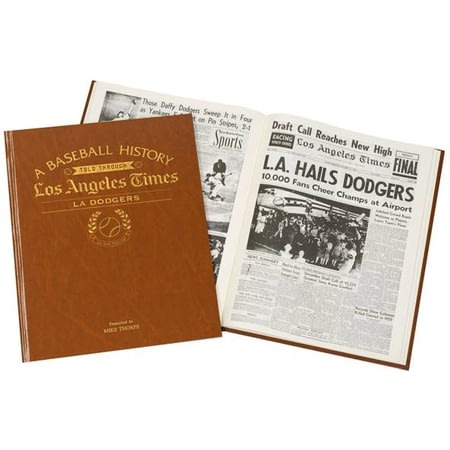 Capture the history and greatest moments of the LA Dodgers through LA Times newspaper articles written at the time.

Coverage begins on the Eastern coast in 1940 when, while playing as the Brooklyn Dodgers, the teams Tex Carleton won all the plaudits with his no-hitter against the Cincinnati Reds, though still having successes in Brooklyn, the team later moved to LA in 1958. Standout wins and numerous West Division titles are reported on throughout the book, making this a thrilling read for any ball fan.

This book is unique and makes a wonderful gift, the perfect for the Dodgers fanatic in your life. Reproduced to near full tabloid newspaper size it is bound in luxury tan leatherette, gold embossed, hardback cover.