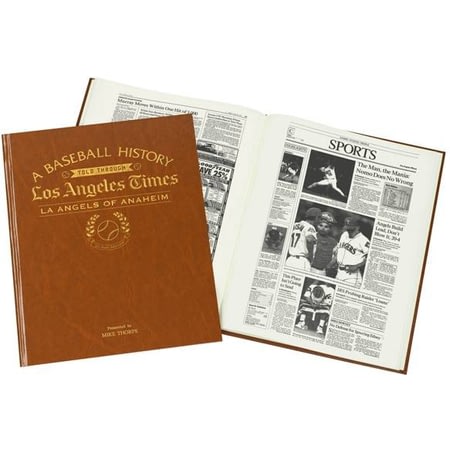 Capture the history and greatest moments of the Angels of Anaheim through LA Times newspaper articles written at the time.

The newspaper coverage gets underway in April 1961 reporting the Angels league debut and resulting victory against the Orioles.

Also included in the books early coverage is the Angels’ move from Los Angeles to Anaheim in 1966, which led to a huge increase in attendances from less than 600,000 a season to over 1.4 million.

This keepsake also includes coverage of important moments such as Rod Carews 3,000th career hit in 1985, and when they beat the San Francisco Giants 4 games to 3 in the highest-scoring World Series of all time in 2002. This book is unique and makes a wonderful gift, the perfect for the Angels fan in your life. Reproduced to near full tabloid newspaper size it is bound in luxury tan leatherette, gold embossed, hardback cover.