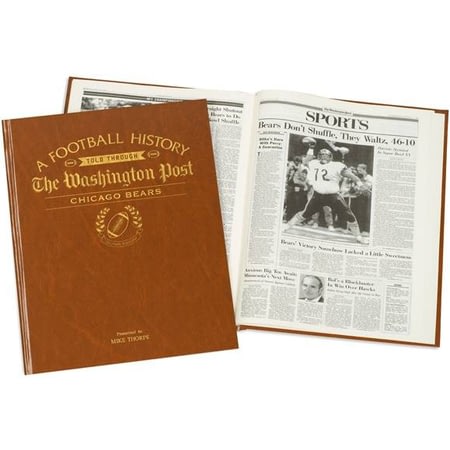 Capture the history and greatest moments of the Chicago Bears through Washington Post newspaper articles written at the time.

Starting with coverage of the Bears’ second NFL Championship, defeating the Portsmouth Spartans 9-0. Top stories include their 4 NFL championship wins in the 1940s, particularly when they thrashed the Redskins 73-0!

Famous players include Jim McMahon who scored 3 field goals, against the New England Patriots in 1985, with nearly 74,000 fans watching.

This is a unique and wonderful gift and a must have for all Bears fans. Reproduced to near full tabloid newspaper size it is bound in luxury tan leatherette, gold embossed, hardback cover.