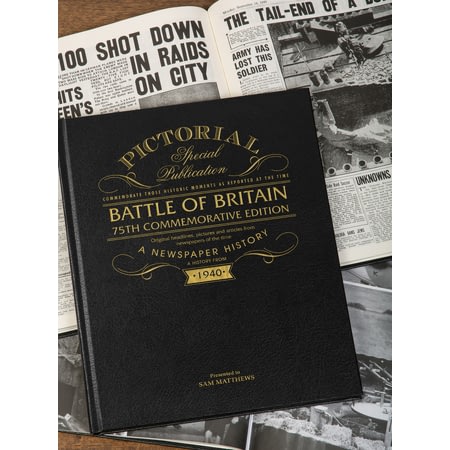 To commemorate the 75th anniversary of the Battle of Britain this unique and detailed compilation of newspaper coverage dates from July-October 1940. The British wartime Prime Minister, Winston Churchill was moved to make one of his most famous speeches “Never in the field of human conflict was so much owed by so many to so few”, referring to the valiant efforts of the RAF pilots during the ongoing Battle of Britain.

Queen Elizabeth, the Queen Mother felt that she could “look the East End in the face” when Buckingham Palace was bombed too.  Follow the events of the Battle of Britain as they unfolded through the contemporary accounts provided in the newspaper pages from that time.

The book includes pictorial sections, together with dramatic reports from the time.

The scans from original newspapers are bound in a luxury black hard back leather, gold embossed cover.